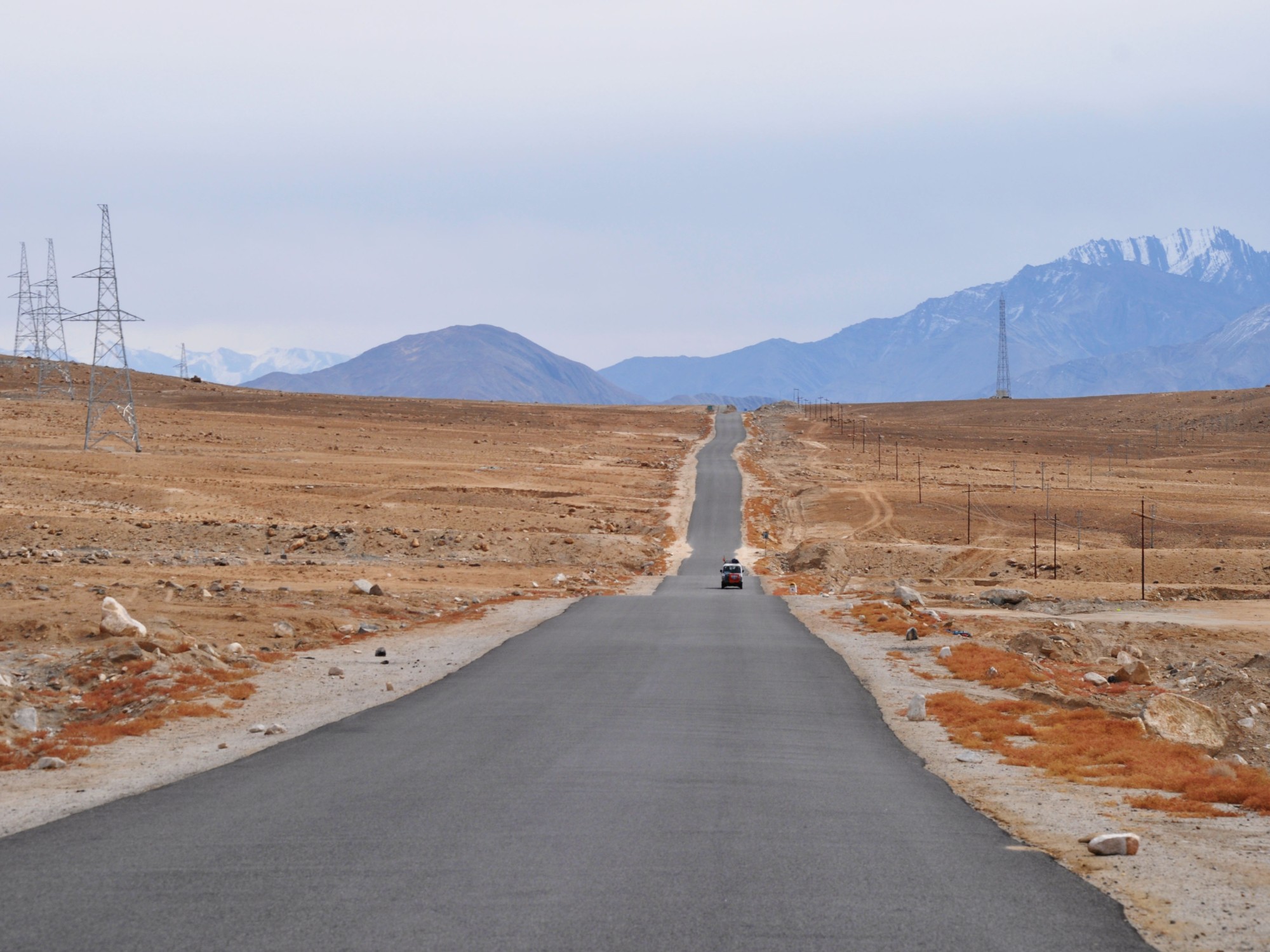 Imagine this. You’re standing on a highway. It’s getting dark (i.e. its 4pm). Three girls and a bunch of (friendly) sheep are all that’s in sight. It’s been an hour. Finally, a car pulls up. It’s a young Kashmiri man, in a handsome black pathani. It’s probably your last shot at a car going this way.

Do you get in?

If you’ve spent over two weeks in Ladakh, you won’t think twice.

Living in cities brings a great deal of mistrust to your personality. Living in a city in India, even more so. If you aren’t careful about it, this mistrust can seriously hamper your travel experience.

Would you get into a stranger’s car on the streets of Delhi? Would you travel for over three hours, with no humans in sight between Mumbai and Lonavala? You’d be crazy to do so. Yet, there’s another part of India that no one seems to have experienced.

Tourists, go ahead and rent taxis in Ladakh. Travellers, those of you looking for real experiences and willing to take risks – this one’s for you.

The day I reached, I had pre booked a taxi from the airport to the campus. Two weeks later, I felt like a fool. The first day we left the campus by the college bus, I noticed the oddest thing. En route to Leh, the bus made about 5 different stops picking strangers up. Old women, kids, young army officials, stooped farmers and many more entered and left the minibus at intervals. As soon as they would enter, everyone would scoot over to make just a little more space. The others sat on their own bags in the aisle, enjoying the Ladakhi pop music blaring in the bus.

This is a common occurrence in Ladakh. Very few people own cars. If they do, it’s usually a Maruti Suzuki. But of course, they’re willing to share every inch of space available to them in this not-so-spacious car. So off we went. Never to book a taxi again for short distances. By the end of the month, I realised there wasn’t really a need to book taxis for long distances either!

Exploration days began the same way. I’d take off with my co-volunteer friend from the campus, walk for 45 minutes across barren landscapes, with no sign of life in sight and military planes conducting exercises overhead. In cities you can barely hear a plane flying overhead. But here, where a dog’s bark echoes for many a mile, the sound of these planes are deafening, like the mountains are playing ping pong and you’re the table. We’d walk across hills and river beds in the blazing sun and cool air, with fighter planes constantly circling overhead.

After reaching the highway along Phayang village, the wait would start. During tourist season, I’m guessing the wait wouldn’t last for more than 10 minutes. This was not the case in off-season. The number of cars on the road drastically reduces and often the cars are already full of hitchhikers by the time they get to you. However, there wasn’t one instance when we did not get a lift.  Sometimes we would separate out, and meet up somehow at some point (given that there’s no mobile network).

The act of hitchhiking is as simple as sticking your thumb out, having a car pull up, getting into it and trusting a stranger with your life. Easy. To me it was a raw activity, one that belonged to a simpler time when trust was inbuilt in humans. It led me to some of the most unique experiences during my journey. 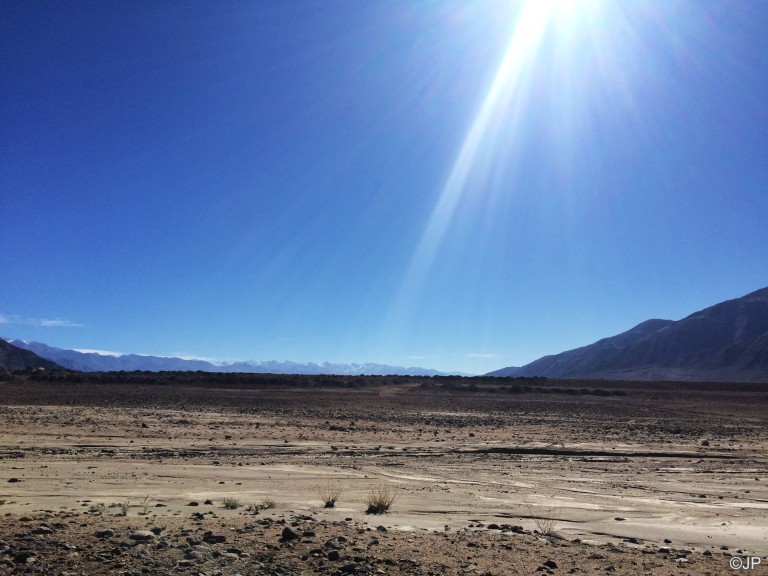 A volunteer and I once dedicated an entire day to hitchhiking. We went from Phayang to Leh, Leh to Choglamsar to Shey, Shey Palace back to somewhere near Leh, hitchhiked all the way through Leh, trekked up to Shanti Stupa and finally got a lift closer to the monument; approx. 45 kms all in under Rs. 80. And on it went.

The climb to Shanti Stupa is a steep one. Throw in the lack of oxygen and it’s close to unbearable. Our saviour while walking up was only the coolest monk that ever lived. He pulled up to us in his Santro. We asked him if he’d drop us closer to the Stupa, on his way. He said he would not, then laughed at our puzzle expressions and opened the door to let us in. He refused to tell us where he was headed. We just followed his lead. He spoke to my friend in broken French, told me I had made the right decision in quitting my job and must now never leave Ladakh. He spoke of how we should make a Bollywood film together and he’d play the villain! He was the definition of a jolly monk.

Suddenly, we see him pull up to the gates at Shanti Stupa. We thanked him for dropping us all the way. In reply, he handed me a key and asked me to open the gate! Turns out, Lama Lopsang was the Monk of Shanti Stupa! He was the caretaker/Head Priest in layman’s terms, of this iconic monument. He parked his car and refused to let us help him carry his groceries. He invited us for tea. We were really late by now, and knew it would be extremely difficult to get a lift and then trek back once it got dark. Worth the risk? Definitely.

We entered his warm single-room home. Here he made us hot tea, offered up a stock of favourite biscuits and then made fun of us for living materialistic lives… He narrated stories of how he officiated a wedding in France, was constructing his own house in a village near Thicksey and explained to us the principles of Buddhism. “Let go of three things: Anger, Ignorance and Attachment”.

Never have I felt so in awe of a man. This wasn’t someone who had never lived. This was a man who lived like we did, minus the unnecessary fluff that we love so much. He had seen the world, met people, and taught himself English and subjects which weren’t ever made available to him in monastery schools back then.

When you travel to such places, go against every instinct you have cultivated, having lived in the city. Get into a strange man’s car. Leave your house with less than Rs. 200 in your pocket. Be prepared to walk over 20kms in the middle of nowhere. When the situation comes to its worst, you’ll be able to manage handle any kind of circumstance. In the meantime, have a little faith.

Closer to the month’s end, three of us girls decided to do a weekend trip up the other side – the west of Ladakh. The plan was to hitchhike a bit and then trek onward, looking for a homestay. Four hours, an army medical jeep, an open pick-up truck, lunch at a dhaba with truck drivers and a Sumo later, we reached Lamayuru monastery, 65kms from Phayang (In Rs. 300).

We passed the most beautiful and deserted landscapes we had seen in all of Ladakh. Up we went, passing Nimmu, Basgo, Alchi, Saspol, Kaltse and the confluence point of rivers Zanskar and Indus, with the river changing colours every few kms. We were thrown around in the back, freezing, our stomachs growling; but nothing could match up to this adventure. The Zanskar river along us was turquoise and literally sparkling like a precious stone. When the truck slowed down (which was pretty damn rare), we could see the tall trees on the other side of the bank reflected in the water, with white brown trees towering menacingly above them.

Rocks form a rough, threatening roof over the narrow road – not a greatly comforting feeling when you’re sitting out in the open in the back of a pick-up truck.

Our weekend trip didn’t go as planned – it rarely ever does when you’re leaving your transport up to fate. There were close to no homestays open as it was off season. We waited for over an hour at the bottom of Lamayuru monastery. BJP rally cars were all around. Political parties around here seem to have all the money to pay youngsters to hook up speakers to cars and driver it around Ladakh, but never seem to have sufficient funds to help their voters out with basic facilities like food and heating for the winters.

An amused voice called out from behind us, “Do you need some help?” It belonged to Angmo.  Turns out, this beautiful young girl sitting by the road in the middle of god knows where, is a law student from New Delhi! Her family ran the guesthouse and café right behind us, the one we’d been eyeing because of the “WiFi” sign painted across the front wall. Her English was fluent. She was a well-educated, ambitious woman who was having trouble adjusting to the cold October weather in her hometown, after having spent over 10 years in Delhi.

The feeling of such priceless interactions, experiencing the unexpected in the remotest of places is unparalleled. These are the moments I remember most vividly.

The young Kashmiri man whose “van” we eventually got into was Sajjad. A taxi driver with better manners than most men in Mumbai (sorry guys). Every time we stopped to look for a homestay, he would insist on waiting until we were guaranteed a place for the night.  This was a man who asked us to “pay whatever we like” (as opposed to charging us a couple of thousand rupees – each) simply because he would enjoy some company on the long drive.

He told us stories about Kashmir, called us fools for visiting Ladakh and not Srinagar, narrated tales of his adventures driving trucks for over 21 days, transporting apples from Kashmir to Mumbai. At the end of the day, we had unknowingly hitched a ride with a truck driver!

Travel is about changing your perceptions. For me, the opportunities to do so were plentiful.

We once got into a car with four young Punjabi men. Albeit in broad daylight, they suddenly took a turn off the main road that led to Leh. For the next 25 minutes, I was wondering if this was the scenario we had been warned about as kids. My mind started to veer towards the worst cases and planning escape routes, as the car moved on a smooth road in the mountains, with no other cars, houses or horses in sight. There was only so much we could do to not panic. The car finally turned a corner and reached the other side of the highway we were familiar with, having passed an entire truck-induced traffic jam on the way.

These men, of whom we had been so afraid of, insisted on dropping us off to the main market in Leh, even though it was out of the way; leaving me wondering what it is in Ladakh that, simply put, restores one’s faith in humanity.

8 thoughts on “The Hitchhikers Guide to Wonderland”

What Can You Expect?